Garching, Munich. Germany – OncoBeta® GmbH has announced University Clinic of Rostock (is particpating in the global phase IV EPIC-Skin Study (Efficacy of Personalised Irradiation with Rhenium-SCT – for the treatment of non-melanoma skin cancer [NMSC]) treating its first patients with Rhenium-SCT® as part of the international study.

The first German patients were treated on xx June , and are now part of 210 adults participating in the international study that will follow their progress over the next 24 months. The EPIC-Skin study is being conducted through study centres located in Australia, Austria, United Kingdom and Germany.

Rhenium-SCT® has been used in Rostock and in other parts of Germany as an NMSC treatment for some time. In addition to this EPIC-Skin Study, The University Clinic of Rostock has also been involved in a local clinical study using Rhenium-SCT, with results due to be presented later this year.

Treating physician in the EPIC-Skin study - University Clinic of Rostock , Dr. Martin Heuschkel (Nuclear Medicine) said, “Rhenium-SCT® is viewed as a favourable treatment due to its ability to be applied directly to an affected area, without harming or scarring surrounding tissue. This study presents the unqiue opportunity to further evaluate this new non-invasive epidermal radioisotope therapy and its long-term efficacy in improving patient outcomes.”

There are more than 7.7 million cases of NMSC each year, and incidence rates are increasing globally1,2 with Germany currently ranked eight in the world3. Standard treatments for NMSCs are surgery-based approaches, which may have a risk of scarring or loss of function. Rhenium-SCT® uses a non-invasive paste containing ß-emitting particles directly to the lesion, which eliminate cancer cells without the need for surgery, in one single session.4-6

Dr Gerhard Dahlhoff, Medical Director at OncoBeta GmbH, says, “The role of the EPIC-Skin Study is not to challenge the existing treatment options but rather to show Rhenium-SCT® is a treatment alternative with which NMSCs can be cured effectively, with a strong focus on patient perspectives.”

The EPIC-Skin study will measure Patient Reported Outcomes such as quality of life, treatment comfort and cosmetic outcomes, as well as further evaluating the efficacy of Rhenium-SCT for the treatment of NMSC. To provide a simple and streamlined way to record their experiences, patients in the study will utilise OncoBeta’s Clinical Study app.

Shannon D. Brown III, CEO and Managing Director at OncoBeta, says, “OncoBeta’s goal is to provide the best innovative solutions for patients suffering from NMSCs. Rostock is the second centre in Europe participating in the EPIC-Skin study provding important multi-centre data that will offer new insights in the treatment of NMSC’s and the role of Rhenium-SCT® as a treatment alternative for patients.” 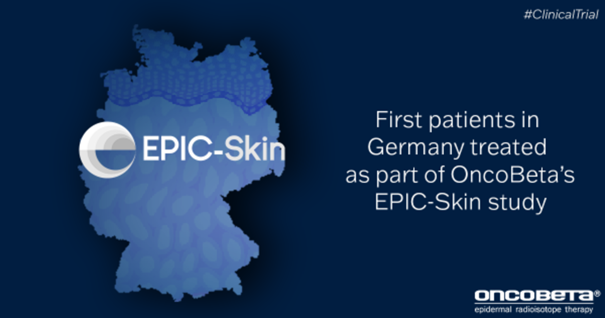